By using the first supersonic structure ever developed in the history of ionisers, KEYENCE has increased the speed of ions past the speed of sound, which makes the fastest static elimination in the world possible with an extremely low air volume. 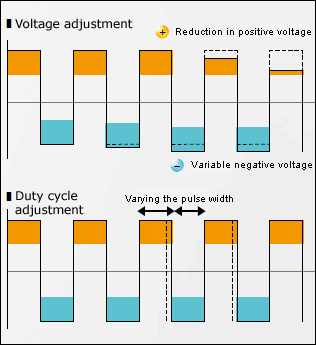 The Dual I.C.C. system, which has an established reputation from our conventional models, has evolved even further. The Hi-Power I.C.C. system has been installed in our ionisers. In addition to control of the amount of ions generated through pulse width variations according to the frequency, this system makes possible voltage variations that are 2.5 times those of conventional models. This system makes wider control of the amount of ions generated per unit time possible. This system senses (1) changes to the electrostatic charge caused by environmental factors such as temperature and humidity and (2) time-dependent changes to the electrode probes, which enables more optimal static elimination. 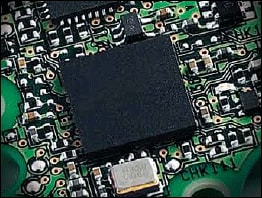 The newly developed high-performance ion generation system, which supports targets that move at faster speeds than before, enables fast static elimination at a maximum speed of 100 Hz. Also, by increasing the amount of ions generated by 15% compared with conventional models, we have made it possible to eliminate static from targets that have a large electrostatic charge, which was difficult with conventional static elimination.