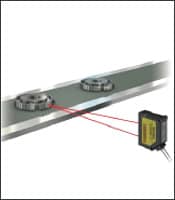 A material handling company uses a large automated conveyor system to transport trays of parts among each of many process stations. The process stations typically involve high heat environments.

As a side note, the trays are sintered in the process stations and therefore appear somewhat multicolored.

KEYENCE's GV distance-based sensors work well to detect improperly loaded trays. The GV is mounted to look at the side of each tray as it passes on the conveyor. A properly seated tray passes at the accurate distance from the sensor head whereas an improperly loaded tray passes either too close to or too far from the sensor. The GV, set in area mode, reliably detects either of the two problem situations and alerts operators to the situation before the misloaded tray can crash the production line.

As a side note, the GV's distance based sensing overcomes what is normally a sensing nightmare - multicolored targets. The discoloration on the trays caused by repeated heating and cooling is not an issue.